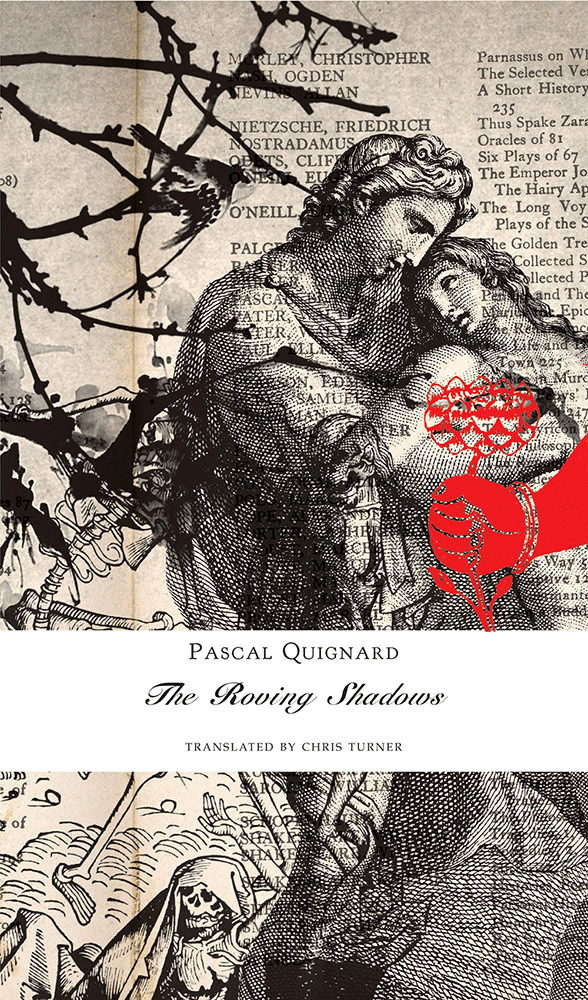 Translated by Chris Turner
₹499.00 $19.00
There are few, if any, voices more distinct in contemporary French literature than that of Pascal Quignard, a prolific writer of rare erudition and elegance. Essayist, critic, translator, novelist and musician, Quignard attempts here an ambitious amalgam of his many artistic styles in a fragmentary work that defies the idea of genre. And his daring was rewarded in 2002 when The Roving Shadows became the first non-novel in more than sixty years to win the Goncourt Prize, France’s most prestigious literary award.
The first book in Quignard’s Last Kingdom series, The Roving Shadows can be read as a long meditation on reading and writing that strives to situate these otherwise innocuous activities in a profound relationship to sex and death. Writing and reading can in fact be linked to our animal natures and artistic strivings, to primal forces and culturally persistent fascinations. With dexterity and inventiveness, Quignard weaves together historical anecdotes, folktales from the East and West, fragments of myth, and speculative historical reconstructions. The whole, written in a musical style not far removed from that of Couperin, whose piano composition Les Ombres errantes lends the book its title, coheres into a work of literature that reverberates in the psyche long after one has laid it down.
The Roving Shadows is a rare and wondrous tour de force that cements Quignard’s reputation in contemporary world literature. Available now for the first time in English, this boldly adventurous work will find a new and welcoming audience.
‘Quignard has a visionary take on elements of the meditative qualities of reading. Flitting seamlessly between a range of genre, one never quite keeps up with the mind of Quignard, nor will you find yourself wanting to. The joy truly is in the ride that the author takes you on.’—Chris Reed, NZ Booklovers.
ISBN: 9780857426659
Size: 5" x 8"
Rights: World
Pages: 264
Format: Paperback
Publication Year: March, 2019
Shipping: Shipping rates will be calculated at checkout and will depend on your location.