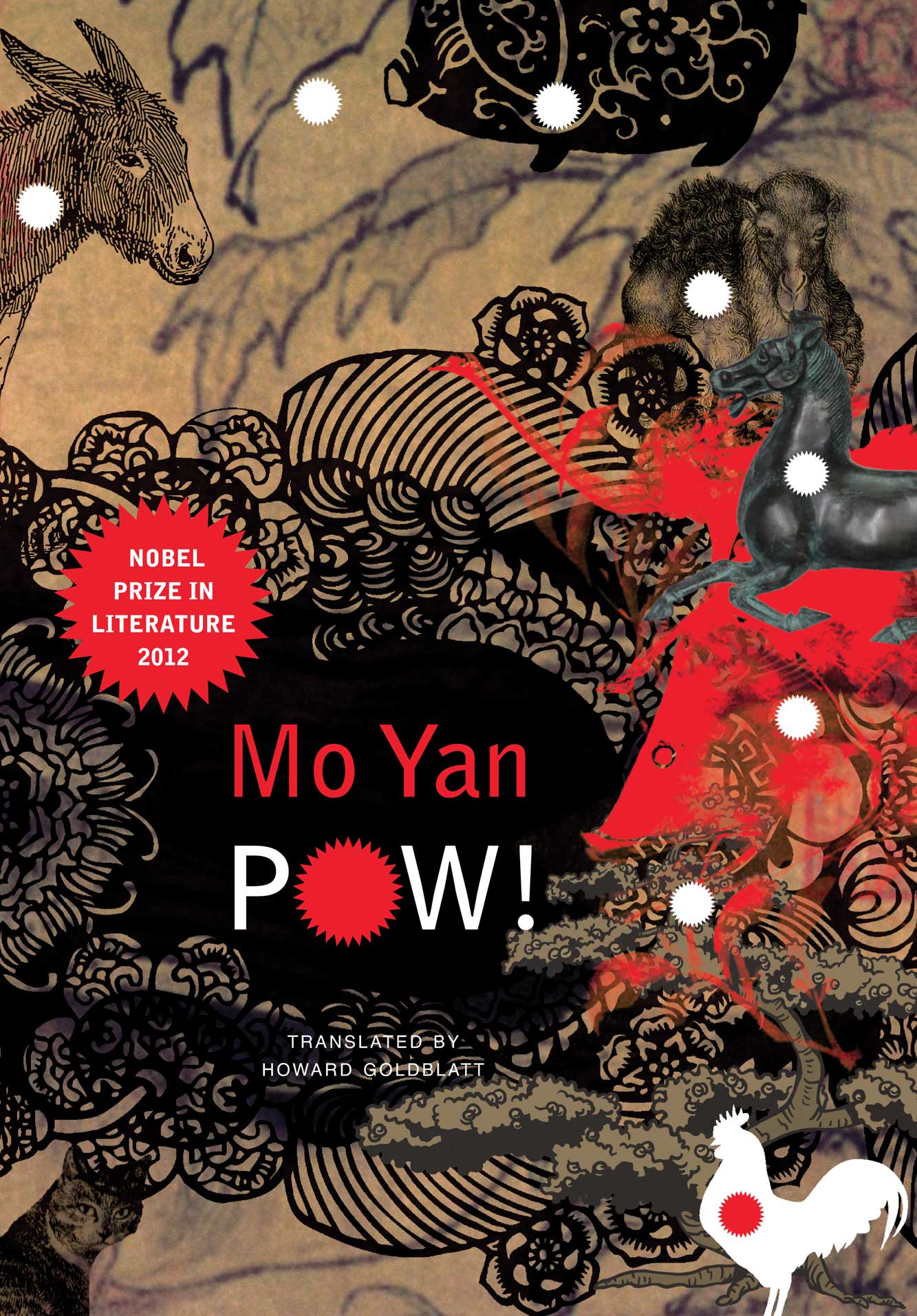 In this novel by the 2012 Nobel Laureate in Literature, a benign old monk listens to a prospective novice’s tale of depravity, violence and carnivorous excess while a nice little family drama—in which nearly everyone dies—unfurls. But in this tale of sharp hatchets, bad water and a rusty WWII mortar, we can’t help but laugh. Reminiscent of the novels of dark masters of European absurdism like Günter Grass, Witold Gombrowicz or Jakov Lind, Mo Yan’s POW! is a comic masterpiece.

In this bizarre romp through the Chinese countryside, the author treats us to a cornucopia of cooked animal flesh—ostrich, camel, donkey, dog as well as the more common varieties. As his dual narratives merge and feather into one another, each informing and illuminating the other, Mo Yan probes the character and lifestyle of modern China. Displaying his many talents, as fabulist, storyteller, scatologist, master of allusion and cliché and more, POW! carries the reader along quickly, hungrily and giddily, up until its surprising dénouement.

Mo Yan has been called one of the great novelists of modern Chinese literature and the New York Times Book Review has hailed his work as harsh and gritty, raunchy and funny. He writes big, sometimes mystifying, sometimes infuriating, but always entertaining novels—and POW! is no exception.

“On October 11, the Chinese writer Mo Yan was awarded the Nobel Prize in Literature, and two months later his new novel, Pow!, demonstrates for Americans why he deserved to win. It’s a vibrant, visceral novel that is both personal and political, realistic and surrealistic, funny and shocking. The explosive title cries out—Pow!—but it is also a subtle display of narrative wizardry. . . . Mo Yan’s Pow! is a pyrotechnic display of how to blow up one’s personal life to mythic proportions.”—Steven Moore, Washington Post

“Mo Yan is a writer who, defiantly in the face of those who wish his work were less cartoonish and more straightforward in its political meanings, continues to sing his own peculiar and alluring song.”—Dwight Garner, New York Times

“Mo the public figure is careful with words. But Mo the novelist slips past the censors by dressing up his cutting realism in absurd and fantastic clothing. In doing so, he’s embracing a long tradition that stretches from Cervantes to the German novelist Günter Grass. . . . Mo’s skill makes POW! a wild, unpredictable ride—a work of demented and subversive genius.”—Hector Tobar, Los Angeles Times

“Like Gabriel Garcia Marquez, whose work Mo Yan has claimed as an inspiration, sometimes the images in Pow! overflow, and the very point of his writing is that abundance. Unlike the magical realists, however, there is a lucid clarity to Mo Yan’s best writing. In this country he is akin to William T. Vollmann, whose books are long and dense with harrowing and acute images.”—John Freeman, Boston Globe

“The brilliance of this novel—and the reason it deserves comparisons to so many great authors—is the way in which this tragic story is filtered through the eyes of a twelve-year-old boy. . . . As a result, the story gets pulled and twisted out of shape, and what is ‘real’ becomes a lot less certain—especially when Xiaotong keeps insisting on his story’s veracity.”—Chad Post, Three Percent

“Pow! is a frenzied stew of stinging satire and theatre of the absurd. Readers are free to interpret it as they wish; the truth is in there somewhere.”—Jason Beerman, Toronto Star

“There is little doubt that Mo Yan’s novel Pow!—with its Rabelaisian carnivalesque language and surrealist narration—rightly belongs among the best of world literature. . . . Mo’s novel in the English version, rendered beautifully and ingeniously by Howard Goldblatt, has acquired a poetic, or rather, onomatopoetic title . . . [and] readers of Pow! are bombarded page after page by the blaring force of a story of carnivorous excess that bares China’s soiled bottom.”—Yunte Huang, Chicago Tribune

“Pow! is a Rorschach inkblot of a book, and all the better for not telling the reader what to think. Within the book, meat is everywhere and everything. What that means could be anything.”—Economist

“Mo, winner of the 2012 Nobel Prize in Literature, was much criticized in the days following the award for his perceived cozy relationship with the Chinese government and reluctance to stand up for freedom of expression. Such judgments, however, are challenged by his bold, outlandish and far from apolitical new novel. Like his earlier works, Pow! defies easy definition. It is national and personal in its concerns, surreal and real, and as comic as it is serious.”—Krys Lee, Financial Times

“Mo’s work is shot through with politics and history, and Pow! is no exception. Translated by the masterful Howard Goldblatt, Pow! adds to the growing list of Mo Yan’s rollicking and ribald novels available in English—all translated by Goldblatt, who has championed Mo Yan’s work for decades and continues to do the author great justice in his earthy and vivid translations.”—Andrea Lingenfelter, Quarterly Conversation