With evening the autumn woods sound
Of deadly arms, the golden plains
And blue lakes, over which the sun
Trundles hazier; the night envelopes
Dying warriors, the wild lament
Of their shattered jaws.
But silent in the willow-marsh gather
Red clouds, wherein an angry god dwells,
The spilt blood itself, lunar cold;
All roads empty into black corruption.
Beneath the golden limbs of night and stars
The sister’s shadow goes to and fro through the still grove,
Hailing the ghosts of heroes, the bloody heads;
And the black pipes of autumn play softly in the reeds.
O prouder sorrow! You brass altars
Today a colossal pain feeds the hot flame of the spirit,
The unborn descendants.

On 3 November 1914, the Austrian poet Georg Trakl, suffering from depression, died of a cocaine overdose. At the time, he was serving as a medical officer for the Austro-Hungarian army on the Eastern Front. It had just been weeks since he tended to soldiers at the fierce Battle of Grodek, memorialised in his poem above, penned days before he died.

In the excerpt below, taken from his Collected Poems, translator James Reidel sketches the last few days of Trakl’s Life. 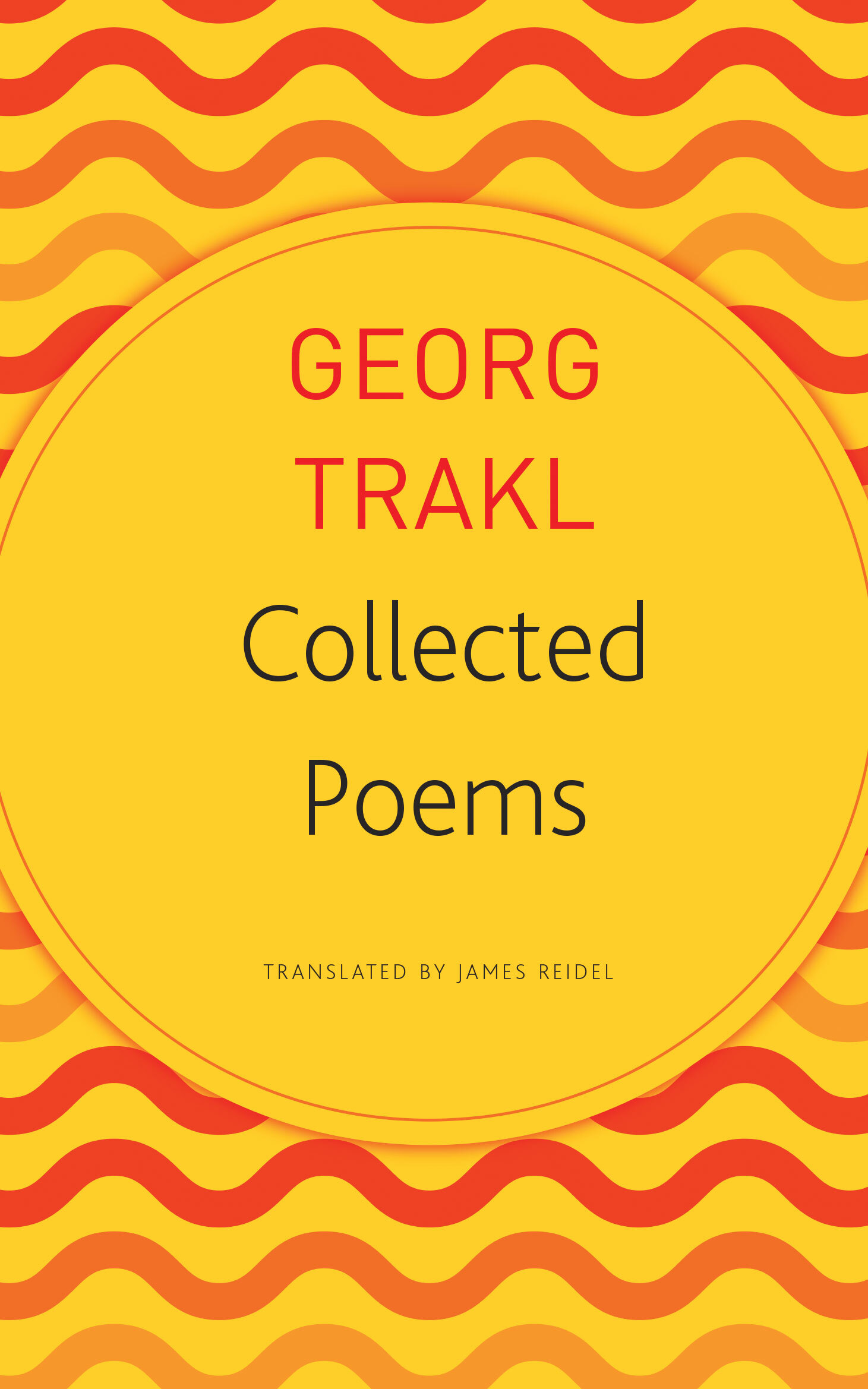 In late May [1914], an article appeared in the Vienna Neue Freie Presse in which Trakl was included among profiles of Stefan George, Rainer Maria Rilke and Franz Werfel. In July, the philosopher Ludwig Wittgenstein gave von Ficker 100,000 crowns to award to any ‘impecunious’ writer he liked. From that largesse, Trakl received the most, an honorarium of 20,000 crowns, worth $95,000 at this writing. And Wittgenstein was pleased by the choice, although he confessed that he ‘did not understand’ Trakl’s poems though they had a ‘pleasing tone’, the ‘tone of a truly brilliant person’. (The admission is all the more incredible, for Wittgenstein, the author of the Tractatus Logico-philosophicus, sets forth in mathematically precise terms the limitations of language in relating reality.)

Trakl had little opportunity to enjoy his newfound wealth as he began to finalize Sebastian Dreaming. In late June, the heir to the Austro-Hungarian throne, Archduke Franz Ferdinand, was assassinated. In a matter of weeks, what would become the First World War began to unfold and Trakl was mobilized; but rather than being assigned to a field hospital, he was deployed with a frontline infantry unit as one of its medics. In August, he found himself on a troop train heading east for Galicia, where the Austrian high command intended to invade the Russian half of that Polish region.

During the early days of September, Trakl’s regiment, part of the Fourth Army, encountered the Russians near the town of Grodek. The engagement, known as the Battle of Rawa-Ruska, resulted in enormous casualties. Trakl, whose role was still that of a pharmacist, was put in charge of caring for ninety wounded with nothing but a commandeered barn for a field hospital and scant drugs or training to deal with the carnage. As he tried to relieve the pain of the suffering, amid their cries of pain, he heard, as he told von Ficker later, a ‘weak detonation’ and saw that a soldier had killed himself with a gunshot wound to the head. Disturbed by the sight of blood and brains splattered against the barn wall, Trakl ran away from his charges into a wooded area where he witnessed another horror: the corpses of Ukrainian peasants dangling eerily from the trees—all hanged.

In the six weeks that followed, Trakl’s regiment retreated westwards uneventfully and slowly. His letters during this time seem almost cheerful, if not resigned, to the war and soberly reflective and observant, even though one doctor who examined him noted that Trakl had been using ‘large amounts of cocaine’ for some time. To von Ficker he wrote of the arduous march further west, ‘morning after morning’. While camped in the small town of Limanowa, he described the ‘gentle and serene’ hills that surrounded him and that the atmosphere reminded him of the recent peace. However, despite the warm autumn weather and the stark beauty of the farmland and rural villages, Trakl feared what he saw as preparations for ‘a new great battle’ or ‘slaughter’. Soon after, he told his fellow soldiers he intended to shoot himself with his service pistol. They disarmed him and he was committed to a military hospital in Krakow on 6 October—which, he was told, was a reassignment. But instead of dispensing drugs to the patients, he was put in an observation cell.

Although depressed and probably sedated, Trakl tended to his poetry. He also wrote friends of his whereabouts. During the last two weeks of October, he saw von Ficker and told him about the horrors of Grodek.

On 25 October, Trakl sent a telegram to Kurt Wolff, requesting finished copies of Sebastian Dreaming. Wolff, however, could hardly do so as he explained in his response written during the following week. He and his editorial staff had been mobilized and now served in the German army on the Western front. He told Trakl that he would have to wait for the end of the war to see his new book, a matter of a few months according to the publisher.

Trakl likely did not see the letter in which Wolff expressed such optimism among the cards and letters he received in the coming days, including Else Lasker-Schüler’s note, which came with a box of chocolate. Trakl also agreed to meet with Ludwig Wittgenstein, who would arrive on 4 November. However, the philosopher arrived too late—Trakl had been found dead in his room on the morning of the previous day. The official medical report termed it ‘Suicide from cocaine poisoning!’ (the attending physician’s exclamation point). In what form remains a mystery. Tablets were used to make solutions. The powdered form, used as a local anaesthetic for nose and throat surgery, could be inhaled. A mystery too is how Trakl obtained enough of the drug. As an officer, he had an orderly named Matthias Roth assigned to serve him as a Bursche (a ‘gofer’ in Austrian military parlance). Thus, through Roth, Trakl could have procured all the cocaine he needed—but it would not have been the drug of choice for suicide. Indeed, cocaine was seen as alternative–antidote to opiates and alcohol, both of which would be ill suited for a soldier and a poet who wanted to desperately see his new book published and who was producing new poems, war poems unlike any other.

Trakl had sent these to von Ficker for commentary and future publication during his last days and, in that, there would seem to be a will to live. The only thing that would suggest otherwise was the correspondence that accompanied the new work, which included his last poem, ‘Grodek’. In one of these letters from the last days of October, Trakl asked the editor if he would oversee his ‘wish and intention’ that Grete receive all the money he had left from of Wittgenstein’s 20,000 crowns, which he had barely touched, and his property—meaning, his advance payment for Sebastian Dreaming. His act seemed in keeping with the watchwords he had written before joining his regiment in August: ‘Understanding during moments of a corpselike existence: All people are worthy of love. Awakening you feel the bitterness of the world; therein is all your open debt; your poem a partial atonement.’

As dire as it might seem to give away his money and possessions to his sister, Trakl wrote Wittgenstein five or six days later, informing his benefactor that he very much looked forward to his visit in the coming days. Trakl wrote, too, that he expected to be released in a matter of days and ‘sent back into the field’.

Then there is the tale Roth wrote von Ficker later which adds further doubt to Trakl’s death being a suicide. The orderly had been with Trakl the evening before he died, which would have been Sunday, 1 November, All Souls’ Day. Roth had grown fond of Trakl, who, hardly the product of an Austrian military school and hardly a martinet, spoke to the former miner in a soft and ‘brotherly’ manner. Trakl only requested that Roth bring him a Schwarzen (a cup of black coffee) the next day, Monday, 2 November. However, Roth had not been allowed to enter Trakl’s room for a twenty-four-hour period as Trakl lay dying. That he could do nothing for Trakl bothered Roth, but he did serve as the only mourner at service held before the hurried burial. Whether Roth was suspicious or simply loyal to his officer, he requested that the coffin be opened before it was interred in a Krakow cemetery. As he examined the poet’s corpse, he noticed an incision, shaped like a half-moon, on the left temple. A shape—that strangely resonates with images from Trakl’s poems, suggesting that an autopsy had been performed or some psychosurgical precursor to the lobotomy procedures of the 1940s. If so, the intervention had gone wrong.

Naturally, von Ficker was left to wonder what really happened to his friend. He had his suspicions too. But, as Karl Kraus believed, it seemed incredible that Trakl had lived as long as he did, constantly telegraphing his death and taking risks with his life every time he took drugs. Von Ficker had to wonder, too, given the last time he saw Trakl, when the latter opened a book by the German Baroque poet Johann Christian Günther and read the poem, ‘Bußgedanken’ (Penitential Thoughts). Von Ficker, ever patient with his friend, had listened carefully to Trakl’s quiet and haunting voice, his unpretentious monotony as it set up the closure, the verse that Günther’s wanted written on his coffin—‘Oft is a good death the best curriculum vitae’—before he too died at the age of twenty-seven.