‘All the Roads Are Open’ by Annemarie Schwarzenbach: An Excerpt

1939. As Europe cascades into war, two Swiss women, Annemarie Schwarzenbach and Ella Maillart, travel from the Balkans to the frontiers of the subcontinent in a Ford. Hoping to flee bellicose Europe, they encounter the rival forces of provincial conservatism and urban modernity in Afghanistan and elsewhere, and their writings repeatedly draw attention to the fragility of "progress".

While Maillart's fictionalised account of the journey, The Cruel Way, was published in 1947 and has since become a classic of travel literature, Schwarzenbach's essays on Afghanistan only became available in German in 2000. They have since been translated by Isabel Fargo Cole into English and published by Seagull Books as All the Roads are Open. Buy this title from our website.

An Excerpt with Photographs from the Journey

In The Garden of The Beautiful Girls of Qaisar

So far Ella and I had been able to discuss the women of Afghanistan only in theoretical terms. In the weeks we had spent in this devoutly Mohammedan country, we had made friends with farmers and city officials, soldiers, bazaar merchants and provincial governors, we were received hospitably everywhere and began to take to this masculine, jovial, unspoilt people. In the magnificent old city of Herat, we watched youths gather on a lawn outside the gate in the evening to fence and pray together. When we stopped on long shadeless stretches, simple peasants joined us and shared their melons. We never had to pitch our tent and cook our soup ourselves. In the villages, the mayors greeted us, served us tea and grapes. In the evening we were led into beautiful gardens, attentive servants brought out the pilaf, the local rice dish, and while we ate the host paid us a visit with his entourage and often spoke with us at length and in depth. 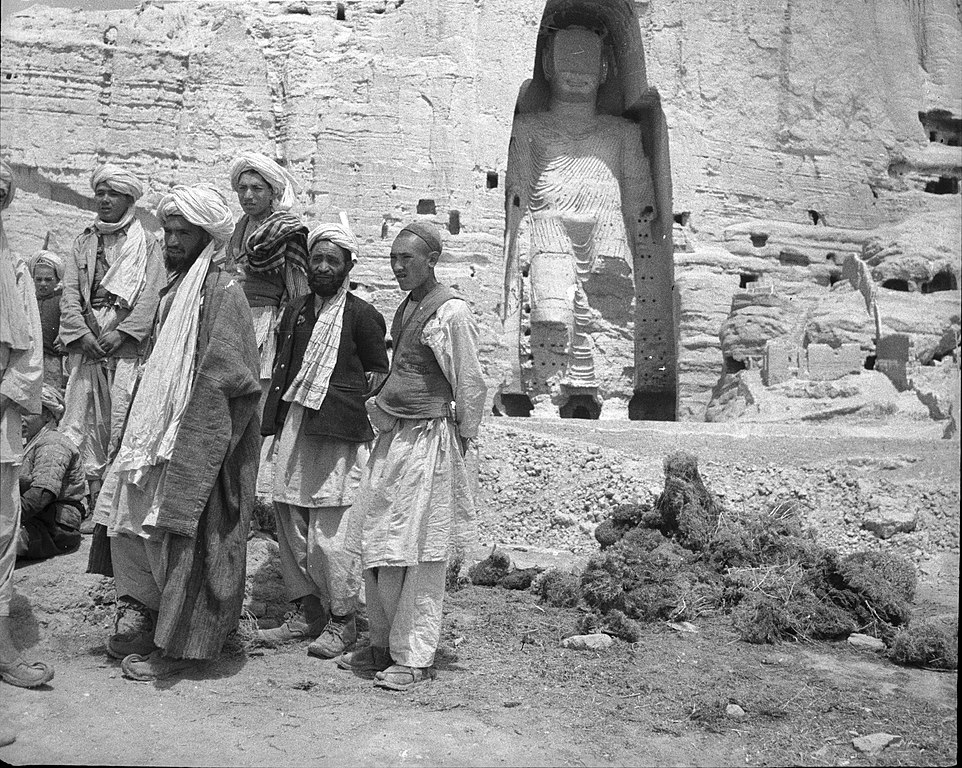 But we seemed to be in a land without women! We knew the chador, Mohammedan women’s all-enveloping drapery, which has little in common with romantic notions of oriental princesses’ wispy veils. It hugs the head, perforated at the face in a sort of grille, then falls to the ground in voluminous folds, barely revealing the embroidered tips and worn-down heels of the slippers. We saw these muffled, formless figures darting shyly down the lanes of the bazaar and knew they were the wives of the proud, free-striding Afghans with their love of company and jovial conversation who spent half the day lounging in the teahouse and at the bazaar. But there was little humanity in these ghostly apparitions. Were they girls, mothers, crones, were they young or old, happy or sad, beautiful or ugly? How did they live, what occupied them, who received their sympathy, their love or their hate? In Turkey and in Iran, we had seen schoolgirls, girl scouts, students, working women and ones active in social causes, already helping to shape the face of their nation, already an integral part of its life. We knew that the young king Amanullah, upon returning from a trip to Europe, had instituted hasty reforms in Afghanistan, attempting to follow Turkey’s example in particular. He had moved too quickly. More than anything else he was reproached for emancipating women. For a few weeks the chador had fallen in the capital of Kabul; then the revolution broke out, women returned to the harem, to their strictly cloistered domestic life, and from then on they could not show themselves on the street without a veil.

Were the first stirrings of freedom forgotten, had those few weeks in 1929 vanished from women’s memory? Once, when we were the guests of a bright, young, open-minded governor somewhere in the north, Ella ventured the question. our host had shown great understanding for the imperatives of the Afghan state, speaking of how road construction would open the country to commerce, how industries could then be introduced and schools and hospitals established. Could women be excluded from such a programme of progress? Must they not share in this new life and be liberated from the stupefying constriction of their existence? The governor replied evasively. When we asked politely whether we could see his wife, he agreed, but then found some excuse. 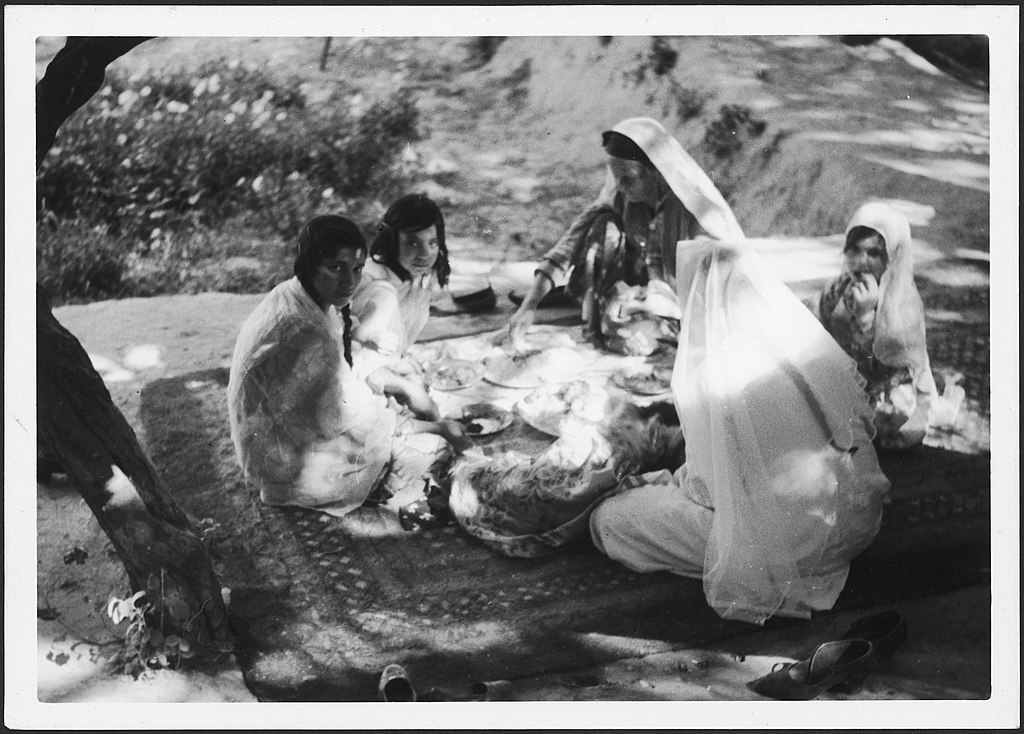 It was not until Qaisar, a small oasis town in the northern province of Turkistan, that to our considerable surprise the Hakim sahib, the mayor himself, invited us with little ado through a small gate into his home’s inner garden, the garden of his wives and daughters. Two young girls in summer dresses, their dark hair shrouded by light, airy veils, approached us smiling. Both were strikingly beautiful—and beautiful, too, was their stately mother with her earnest, friendly gaze. She greeted us under the tall trees, where carpets were laid out and the children played, younger siblings and the daughter-in-law Zara’s blond little boy. Her second child slept in a hammock in the shade. the samovar stood off to the side under the projecting roof of the simple clay house; first we were brought a washbasin and towels, then tea and fruits. the pilaf followed an hour later. The mother ate with us at the table in the European manner. The daughters served us and then ate with the children on the carpet, all from the same enormous bowl of rice—and with their fingers. Finally, the servants ate the ample leftovers. While the Hakim’s family had the handsome, severe facial features of the Afghans, the servants were clearly of a Mongolian race, perhaps Turkmens or Uzbeks. 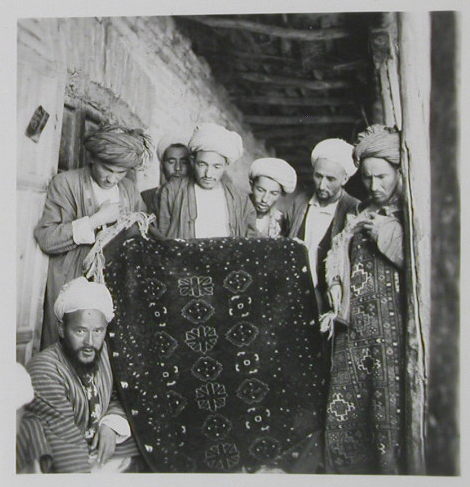 After the meal, we were brought silken mattresses and mosquito nets, but we never got around to resting. Though the girls knew hardly a word of French and we had just a few scraps of Persian, we conversed with animation. They brought a light blue piece of silk and a pair of scissors and wanted us to cut them a dress. But we didn’t dare try, promising instead to send them French magazines from Kabul with patterns and fashion sections. For the women of Qaisar even Kabul was the wide world, civilization. And yet they’d been taught—at home, of course—to read and write, and knew where India, Moscow, Paris lay; they’d even heard of Switzerland. But they had never taken a journey. They couldn’t imagine ever going further than Mazar- i-sharif, the capital of Afghan Turkistan. did they even have the desire to explore the world, to lead a different life? Or would they forever remain in the shady garden of Qaisar, surrounded by high clay walls, under the patriarchally strict supervision of their mother and mistress? 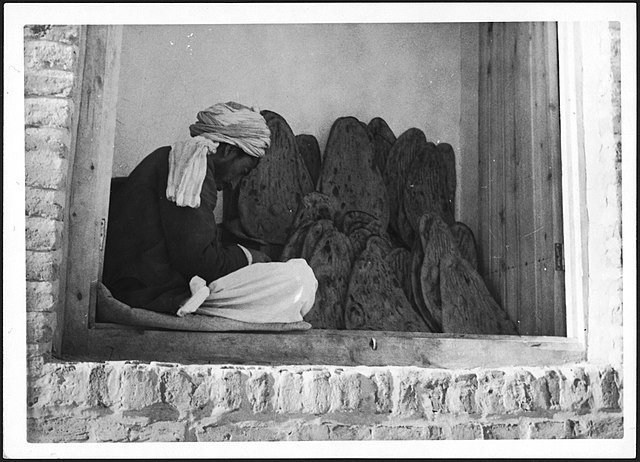 The Hakim had us summoned towards evening, when it had cooled off a bit. Little blond Jakub was allowed to accompany us to the car, but the girls remained behind at the garden gate.

No doubt about it, they were bright girls, gifted even, and charming. We remembered their smiles, the alert and friendly expressions on their faces. only the young daughter-in-law sometimes had a bitter, almost angry look when she took her infant out of the hammock and gave him the breast. Here in her husband’s family she was among strangers, after all, with no household of her own, neither freedom nor rights. 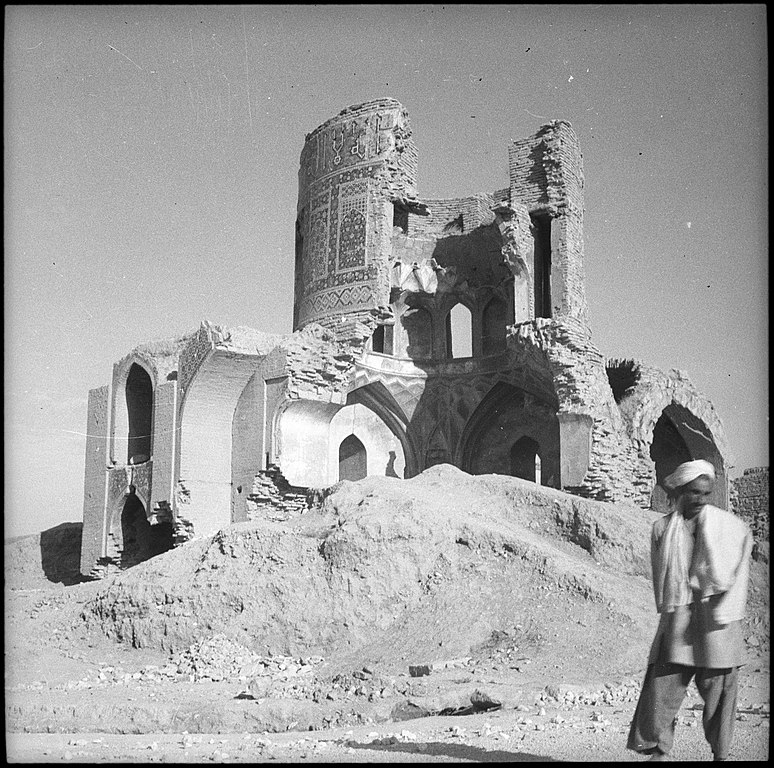 When these girls left the garden, they wore the chador—and saw the outside world only through the perforated grille that hid their face from men’s curious eyes.

We could hardly imagine such a life. But were these women particularly unhappy? one can desire only what one knows. And was it right, was it necessary to educate them and broaden their minds and give them the goad of discontent? But we soon learned that the question is moot. today, Afghanistan is developing according to the fateful laws known as progress whose course cannot be checked. And by sending the promised dress patterns from Kabul to Qaisar, we contributed in our own small way towards the consequences of these laws. We fought the chador!