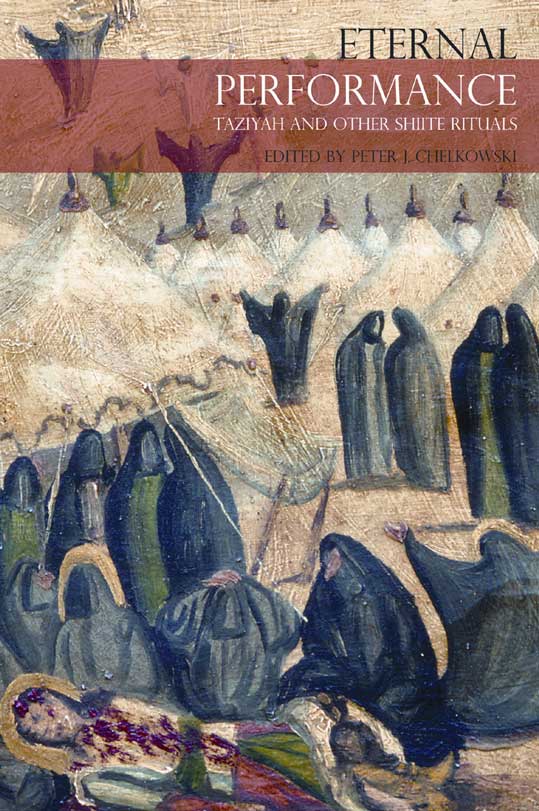 Over the centuries, observances of Muharram, the first month of the Islamic calendar, have traveled far from their origins at Karbala—a windswept desert plain that is now a town in present-day Iraq—where, according to tradition, Hussein, the beloved grandson of Prophet Muhammad, was brutally put to death together with seventy-two of his male companions on the tenth day of the month. For this reason, Muharram is synonymous with both the first month and the tenth day. Hussein’s passion and death are considered the ultimate example of sacrifice for Shia Muslims and scores of rituals devoted to Muharram have developed during the last thirteen centuries, especially in Iran where Twelver Shi’ism became the state religion in the sixteenth century.

As Peter Chelkowski describes in Eternal Performance, many of these rituals were exported to other lands over time. They crossed boundaries and cultures from Iran and Iraq to Lebanon, the Indian subcontinent, North America, and the Caribbean. Yet all Muharram rituals, no matter where or how they are performed, have their origins in Karbala. The transformation and transmission of these observances to their present-day forms around the world are the result of the intersection of multiple races, religions, and artistic traditions. Eternal Performance explores the social, political, cultural, artistic, and religious significance of Muharram rituals for millions of global observers.

‘This is a text that anyone interested in drama of the Muslim world will seek out. The essays as a whole prove especially useful in that the book shows how the death of Hussein is celebrated not only in Iran but also in Pakistan, India, Lebanon, the United States, and Trinidad. The foci of the individual essays vary: history, artistic considerations, gender implications, the performance as a political tool/statement, difficulties of adaptation for Western audiences, and so on. The reader comes away feeling she has received a rather comprehensive overview of the current thinking on the art by authors whose disciplines range from performance to anthropology, medieval studies, and Middle Eastern studies.’ —Asian Theatre Journal