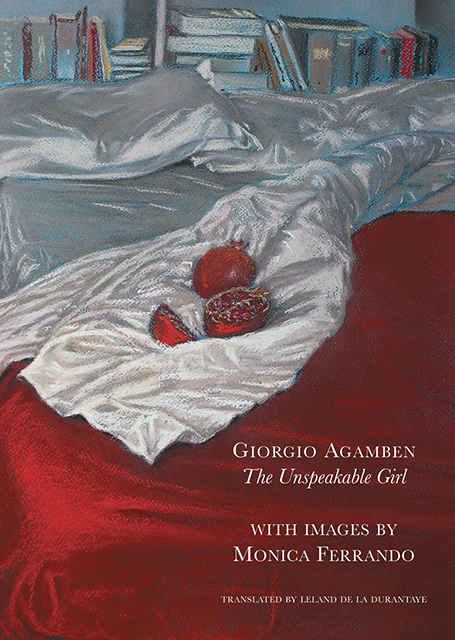 The Myth and Mystery of Kore

Italian philosopher Giorgio Agamben is the rare writer whose ideas and works have a broad appeal across many fields, and his devoted fans are not just philosophers, but readers of political and legal theory, sociology and literary criticism as well. Agamben’s intuition and meditation are fascinating, and not least when he turns his critical eye to the mysteries and contradictions of early religion.

The Unspeakable Girl: The Myth and Mystery of Kore is a book of three richly detailed treatments of the myth of Kore. Kore, also called Persephone, and referred to poetically by the Greeks as ‘the unspeakable girl’, was the daughter of Demeter and Zeus who was abducted by Hades and made queen of the netherworld. Kore and her story gave rise to a mysterious cult at Eleusis, the site of the well where Demeter mourned her lost daughter. This book opens with an innovative and insightful essay that focuses on the mysterious indeterminacy of the figure of Kore/Persephone—at once a woman and a girl, a virgin and a mother—as well as the attendant divisions of speech and silence, the sacred and the profane, the animal and the human, and the mortal and the divine. Here, tracing these dichotomies, Agamben is in top form, able to articulate paradoxes that in another writer’s hands might be ineffable. In the second and third parts of the book the reader is treated to a series of beautiful paintings by acclaimed artist Monica Ferrando, as well as her translation of crucial Greek and Latin source materials. As a whole, The Unspeakable Girl will not only be welcomed by Agamben’s many readers across the disciplines, but also by enthusiasts of classical mythology in general.

‘What is distinctive about Agamben’s presentation of this story is the way he highlights the role of Judaic-Christian concepts like creation and free will in helping to bring about a sense of being—a temporalization and historicization of being—that dissolves the unified grounded cosmos of the pagan tradition [. . .] In the course of the six chapters making up this well-designed little book (handsomely illustrated by Ferrando, who also provides a useful selection from ancient sources at the back), Agamben touches on various intertwined topics: the relation of the mystery cults to European painting, to early Hegel, and to the image philosophies of Warburg and Benjamin; the essentially comic, not tragic, character of the Eleusinian rituals; the Dionysian animality or monstrosity of the triple goddess and the Medusan aspect of the kore or divine child in particular; and, finally, the research of Odo Casel, a twentieth-century German Benedictine monk, for whom Christian liturgy was in essence not doctrine but mystery.’ —Radical Philosophy