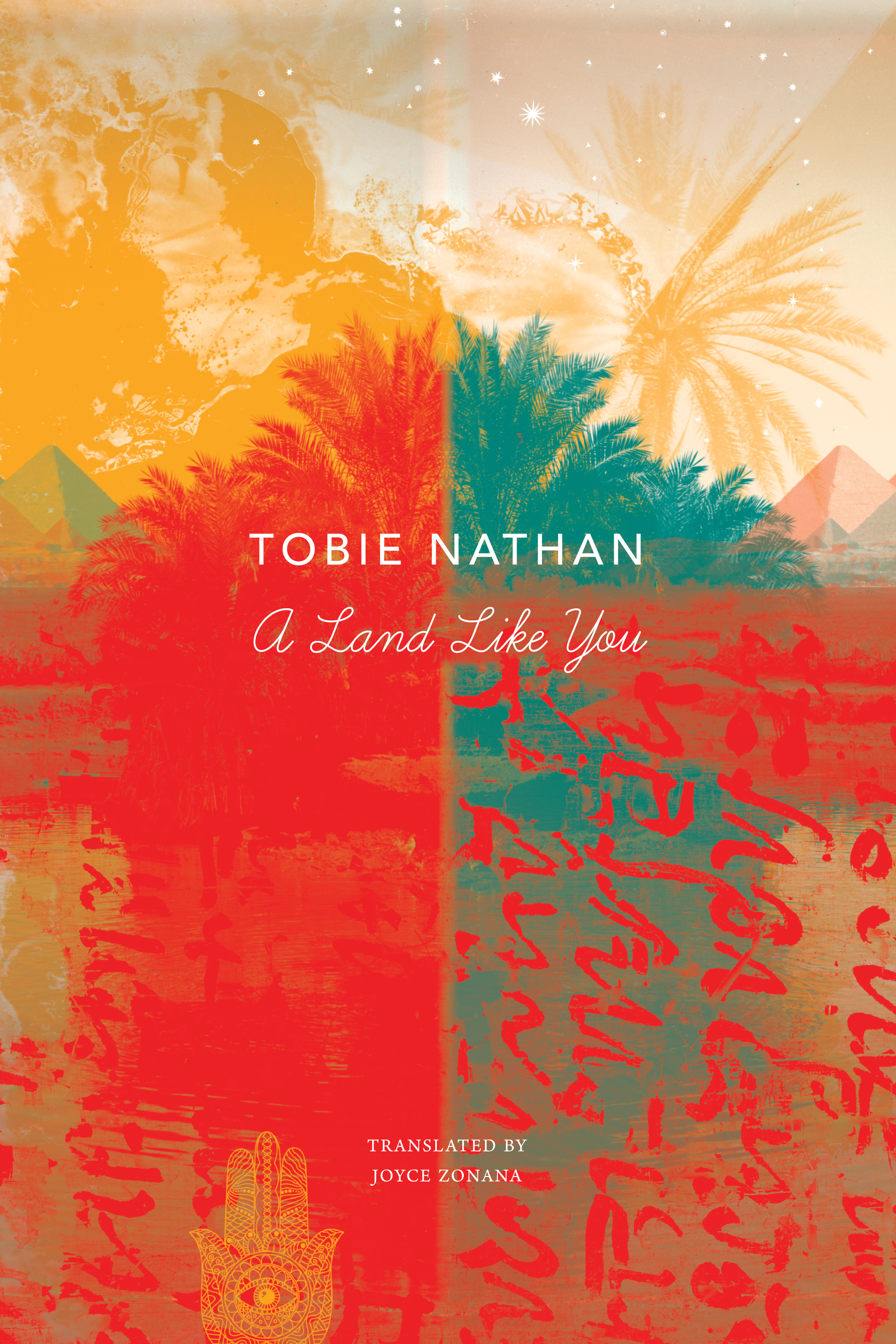 Cairo 1925, Haret al-Yahud, the old Jewish Quarter. Esther, a beautiful young woman believed to be possessed by demons, longs to give birth after seven blissful years of marriage. Her husband, blind since childhood, does not object when, in her effort to conceive, she participates in Muslim zar rituals. Zohar, the novel’s narrator, comes into the world, but because his mother’s breasts are dry, he is nursed by a Muslim peasant—also believed to be possessed—who has just given birth to a girl, Masreya. Suckled at the same breasts and united by a rabbi’s amulet, the milk-twins will be consumed by a passionate, earth-shaking love.

Part fantastical fable, part realistic history, A Land Like You draws on ethno-psychiatrist Tobie Nathan’s own Jewish Egyptian heritage and deep knowledge of North African folk beliefs to create a glittering tapestry in which spirit possession and religious mysticism exist side by side with sober facts about the British occupation of Egypt and the rise of the Muslim Brotherhood and the Free Officers’ Movement. Historical figures such as Gamel Abdel Nasser, Anwar Sadat, and King Farouk mingle with Nathan’s fictional characters in this riveting and revealing tale of an Egypt caught between tradition and modernity, multiculturalism and nationalism, oppression and freedom.

‘Focused on Cairo’s poor Jewish alley (hara) and Muslim delta villages, this hypnotic novel shows how Egypt came to sever its ancient bond between Muslim and Jew, intertwined cultures that call humans “Children of Adam.” . . . Chronicling the fate of Egypt’s Jews, Joyce Zonana’s vibrant yet nuanced translation renders A Land Like You a gorgeous feast for the senses and the spirit.’—Michele Levy, World Literature Today. Read the full review here.

‘The novel, which was nominated for the prestigious Prix Goncourt in 2015, features a large and colorful cast of characters that come together in a panoramic vision of a lost place and time. . . .  Joyce Zonana’s superb translation from the French, for which she received a PEN Translation Fund Award, manages to convey the music and flavor of Arabic speech. . . . There is something heartbreaking in the way Nathan depicts the end of a community that existed for millenniums, watching the rise and fall of civilizations, even as it clung to its rhythms, texts and traditions.’—Reading Jewish Fiction. Read the excellent reivew here.

‘[T]he book opens a door to a world different from what we expect but fundamental to the modern predicament, nonetheless.’—Historical Novel Society

‘Set in the first half of the twentieth century, Tobie Nathan’s A Land Like You tells an interesting, poignant, and humorous generational tale of a family in Cairo’s fabled Jewish Quarter. Through the odysseys of his characters, Nathan, in his novel expressively rendered into English by Joyce Zonana, mirrors a once-thriving cosmopolitan nation ruled by a monarch and under British occupation.’—Alaa Al Aswany, author of The Yacoubian Building and The Automobile Club of Egypt

‘[A] beau­ti­ful and immer­sive nov­el, plung­ing read­ers head­long into Egyp­t’s unique his­to­ry and extra­or­di­nary vari­ety of cul­tures. . . . This is a riv­et­ing nov­el — a must-read. Not only is it a sto­ry of great beau­ty and lyri­cism, but also it has been superbly trans­lat­ed from French into Eng­lish by Joyce Zonana, so that the essence of mean­ing—both lit­er­al and esthet­ic—reach­es the read­er in all its power.’—Jean Nag­gar, Jewish Book Council. Read the brilliant review here.

‘In this breathtaking mixed-genre fictionalized history and fantastical tale, Tobie Nathan offers a poignant account of the last five decades of Cairo’s Jewish community, prior to its calamitous departure for other lands in the 1950s. Through a cornucopia of sensuous allusions to aromas, dishes, amulets, prayers, saints’ tombs, songs, dances, films, and witty colloquialisms, the reader becomes a privileged witness to an Egypt characterized by an intimate cultural continuum between Jews and their neighboring Muslims. Sex, pregnancies, birth, breastfeeding, ablutions, illnesses, desire and death all intersect, revealing shared rituals, beliefs, hopes, and fears. Throughout, A Land Like You rejects the emerging idea that one cannot be both Jewish and Egyptian. In a kind of a metaphorical claim to indigeneity, the novel maintains a consistent lyrical homage to the land through the protagonist’s emphatic pronouncements that Egypt as umm al-dunya (the mother of the world) is also his mother. In this dazzling novel, French stands in, as it were, for Arabic, while also making tangible to the reader the linguistic syncretism as shaped in the wake of imperialism and postcolonial displacements—all rendered in Joyce Zonana’s masterful translation.’—Ella Shohat, author of Taboo Memories, Diasporic Voices

‘[A] wonderful and magical love story that brings to life an Egypt very few of us will recognize. Filled with amazing characters and glorious details of their lives and loves readers will be delighted by what they discover within the book’s pages.’—Richard Marcus. Read the review here.

‘[The] different threads, some historical, some religious, some mystical, some economic — they all intertwine to create a richly layered look at a fascinating time in Cairo’s modern history. ’—Justin Stephani, Full Stop. Read the review here.

Praise for the French original

‘A magnificent novel . . . in which Tobie Nathan, nourished by his deep knowledge of ancient rites and traditions and his long intimacy with society’s outcasts, assumes the voice of the common people of Cairo.’—Le Monde

‘A bewitching fresco, embellished with pharaonic culture and orientalism, retracing the path of the author’s Egyptian childhood.’—L’Express

‘Tobie Nathan’s Egypt is prodigious. It is burning, loving, intrepid. It is made of men and women, mothers and fathers, child-kings and British soldiers. It is made of Egyptians and foreigners and stateless people. Of Arabs, Jews, and Copts. Of dates, pastries, and bread. It is made of the Nile, pyramids, and palaces. Of magic and tragedy.’—Le Point

‘A captivating tale that moves from street to street . . . from era to era . . . a world where Jews and Arabs lived together . . .’—Le Figaro

‘Tobie Nathan recreates an Egypt that is complex, luminous, sensual, multiple and eternal, subject to the vagaries of History, and whose echoes are current . . . An ode to the Egyptian land, to its inhabitants—humans or spirits—and most of all to its mothers, magicians and nurses.’—Sylvie Koneski, Parutions